Native vs. Hybrid: A Guide to Mobile App development

Mobile apps are ubiquitous by their nature. According to research, an average American spends about two hours and fifteen minutes on apps every day.

These aren’t just game apps. The Downloads of other applications are on the rise. An app can obtain numerous advantages for your venture including providing more value to the customers and building strong brand awareness. It is not only a means to enhance customer service but play as a marketing tool as well. This importance of apps for your business is explained by their rising popularity among entrepreneurs. Many business sectors are exploring the potential of mobile apps.

When it comes to mobile app development for your enterprise, customer experience trumps over all other factors. This brings question in selecting between native and hybrid apps. Basically, it’s a matter of choice between the two depends on the goals that your business pursues.

What are native Mobile apps?

For example, if you one have developed an application for iOS, it will work for iPhone users only. It won’t serve the needs of an Android user.

This has a bright edge to it though. Since the native apps are particular to a platform, these can access the full functionality of the device. This boosts their performance as well as speed. And if these are perfectly developed, they can run without error.

Advantages of a native mobile app

Disadvantages of a native mobile app

What are hybrid apps?

The hybrid app is mainly considered native because you can download it from a platform’s app store just as a native app. Hybrid applications are developed due to tools that link the native platform with the web view and allow them to communicate. It’s called a hybrid because it is divided into two parts.

The first is the back-end code, which is built using the coding languages. And the second is that of the native shell, which makes the app downloadable.

Advantages of a hybrid app

Disadvantages of a hybrid app 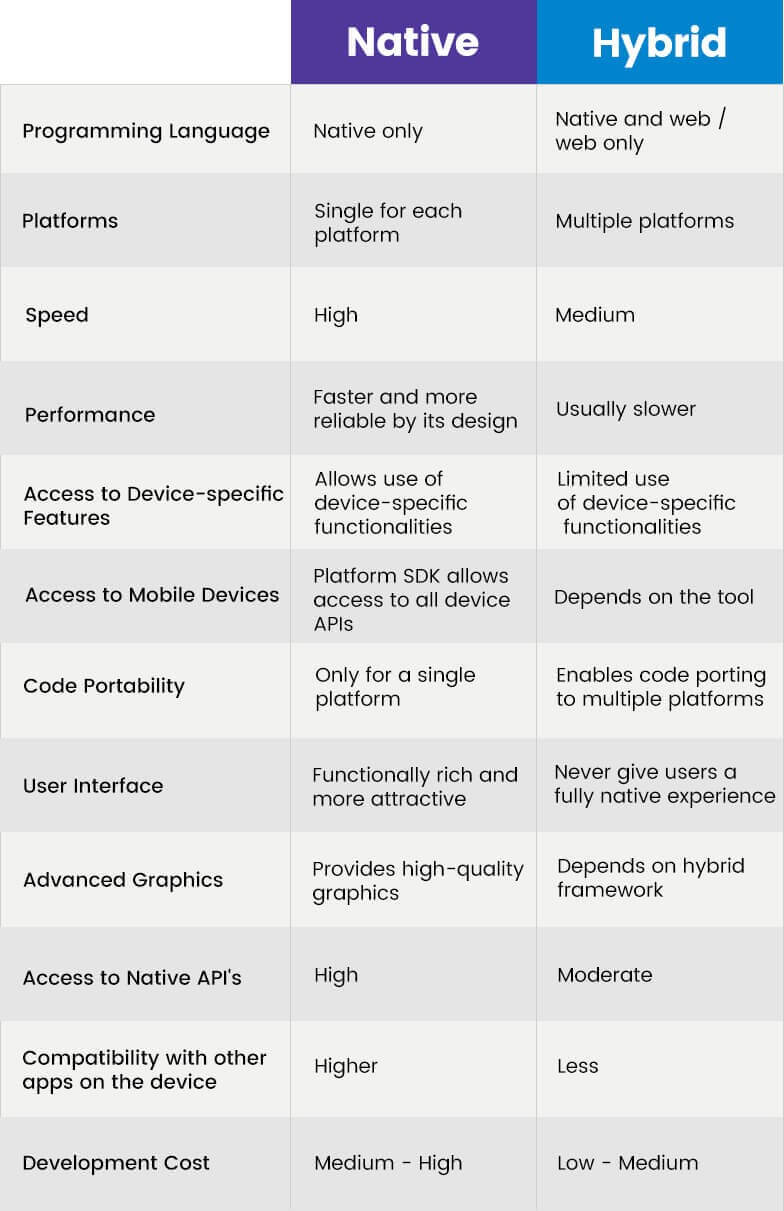 Which type should you choose?

As per a market analysis, 7 out of 11 companies opt for the development of hybrid apps. This means that hybrid application tends to be more popular than native ones. However, it all comes down to your need from an application.

One can call the shots concerning hybrid and native apps by setting your priorities straight. In this regard, there are four important factors to consider. These include budget, the speed that need for building application, the standard of user experience required, and the complexity of the features of app.

Native apps provide an excellent user experience. The hybrid apps are the foundation of their speed and other technical aspects. However, hybrid apps are great for simple and small apps and don’t demand an extensive investment of time and resources.

The final decision to be made for developing the type of app for your business is ultimately determined by what you need and the features that you want your app to offer to your customers.